With the advent of electronic cigarettes, other forms of smoking are going electronic as well. One option now available in electronic form is the hookah. The disposable hookah is an electronic device designed to simulate the slow and calming experience of smoking a hookah pipe, but in a convenient and smoke-free way. It is designed for a one-time use, but you may get up to 800 puffs from one electronic hookah.

What Is A Hookah?

A hookah, also known as a shisha pipe, or a water pipe, is an artistic pipe that originates from India and the Middle East, often being used as a social activity.

Traditionally, a hookah pipe consists of a bowl, or the head, which holds the nicotine, flavorings, and whatever other drugs are being used. This is generally made of clay, glass, or marble. The bowl is placed on a tray of hot coals, which are used to heat up the water vapor.

There is a stem connecting the head to the body, or the vase, which holds the water. When the water is heated, the vapors are inhaled by the smokers through a hose that attaches to the stem. Often, many people will gather around the hookah and spend time together, alternating use of the hose.

Buy Now The Best E-Hookah Vaporizer For Your Needs!

History of the Hookah

Sometime in the 1500s, the first shisha pipes were designed, using a coconut shell as a base. Through wars and travellers, the idea spread throughout Turkey and the Middle East, even into Egypt, gaining in popularity. More and more intellectuals became hookah enthusiasts; thus the pipes became more ornate and were less purely functional. Hookah bars and cafés became popular.

Smoking the hookah pipe is an activity that is meant to be shared, and is also meant to be savored. The traditional flavors of honey and fruit should put one’s mind at ease, and help him to relax while he sits a spell with his friends and enjoys life. This activity should take time, and not be rushed.

Hookah bars grew in popularity, and those who mixed the flavors and managed the shisha pipes were well thought of in society. However, opposition for the hookah pipes grew, as they were often used to smoke harmful drugs such as opium.

Today, minus the use of opium, hookah smoking is a popular pastime, as one feels connected to the past, while sharing time with friends and relaxing. Nevertheless, the use of drugs in the smoking of shisha pipes is still offensive to some people. But with the electronic hookahs, it is possible to simulate the experience of smoking the hookah, completely smoke free, and even nicotine free.

The E-Hookah vs. The Traditional Hookah

Electronic hookahs have been designed to heat the water vapor using heating coils and battery power, as opposed to hot coals. This is easier to use and eliminates the smoke, in addition to the possibility of getting burned or burning through the carpet or couch. They also use e-liquids, or e-juice, which comes already flavored, instead of mixing nicotine and other drugs.

Disposable hookahs come in the form of hookah pens or hookah sticks. There are many different varieties available online. A disposable hookah pen comes with a cartridge, an atomizer and a battery. It is a one-piece design, much akin to the electronic cigarette, and much simpler than the traditional water pipe.

The E-Hookah vs. The E-Cigarette

The difference between electronic cigarettes and electronic hookahs is that hookah pens create thicker clouds of vapor, and thus more flavorful clouds of vapor. It is a more unique vaping experience than the e-cigarette.

The other major difference between electronic cigarettes and electronic hookahs is the flavor varieties. Hookah pens, also called hookah sticks, come ready to use with a flavor already in them. There are many flavors to choose from, including those based on traditional hookah flavors as well as a variety of new and unique flavors. NEwhere offers a line of cultural “USA” flavors, including banana nut bread, orange sherbet, and lemon meringue pie.

Disposable hookah pens are designed for a one-time use vaping experience. They usually last between 500-800 puffs. One of the greatest disadvantages to using disposable hookahs is that they do not last for a very long time. NEwhere hookah pens should generally last for around 800 puffs, depending on how much the individual vaper inhales each time.

Hookah pens have a battery that will provide the power to heat up the vapor. They have a small cartridge of e-liquid that comes with a specific flavor in each disposable hookah pen, all ready to go. Some hookah pens, like those offered by NEwhere, have an advanced micro-chip, that has air-flow technology to maintain the quality of the air and vapor throughout the vaping session.

NEwhere offers three types of electronic hookah pens. There is a variety with a little nicotine in it, a variety with zero nicotine, and the USA variety, made entirely at their US lab and boasting USA brand flavors.

Their low nictotine disposable e-hookahs have about 0.6% nicotine in them. They also have a line of disposable hookah pens with absolutely no nicotine in them at all. The prices for both types are the same, so the choice is up to the vaper. Both pens will provide thick clouds of vapor and strong flavoring. Check E-Puffer review, NEwhere review andClearette review to find out more about their e-hookah products.

Hookah pens are small and sleek, much like electronic cigarettes. They are easy to fit in a purse or a pocket and take with you on the go.

Try Now The Best E-Hookah Vape Pen For Your Needs!

Choosing a disposable hookah pen may be as much fun as using it. Each one comes with a specific flavor, and there are so many to choose from. Here are just a few: 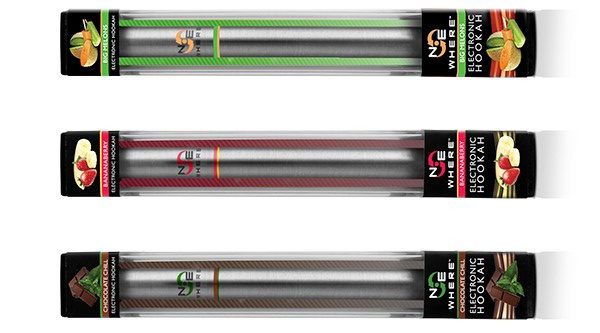 Traditional hookah flavors are fruit and honey flavored, but there are many, many varieties of e-hookahs to choose from. The flavors are sweet and fun. Some flavors have been described to taste like candy.

Some pens also come with a unique design. Crazy colors to match the hookah pen’s flavoring may be added to the black stick. Smooth E hookah pens are decorated with brightly colored flames, a different color to go with each flavor. Voodoo e-hookah flavors are all given themes, such as Cinnamon Fireball and Boo Blueberry. The hookah sticks are designed with images according to the flavor theme, adding something a little more fun to the vaping experience. Hookahs are, after all, supposed to be works of art.

Some disposable hookah pens come with an LED light on the end of them, just for fun.

Look for disposable pens that come with extra mouth tips, so that the hookah vaping experience can be sanitarily shared with many friends, just as the original shisha pipe smoking was done.

Look for variety packs of flavors to try different combinations and save money on the disposable hookah pens.

Some electronic cigarettes have a harshness that leaves a burning in the throat. Electronic hookahs should be smoother, and leave a nicer feeling in the throat. Look for smoothness in the description of the e-hookah when you are searching for what to buy.

Disposable hookah pens are a good choice for people who tend to be social. They can easily be shared if they come with multiple mouth tips, and have many fun designs. They are great for parties, because they can be shared, come in fun colors, and some have LED lights. The flavors are exciting and there are numerous to choose from.

Electronic hookahs are safer than traditional hookahs in more ways than one. They are smoke free, ash free, require less assembly, and there is no chance of being burned. There is also no unbecoming odor given off by the electronic hookah. Each vaper can decide for him or herself the amount of nicotine they want in their hookah pen, and there is even the possibility of zero nicotine.

A good disposable hookah should last for 800 puffs, and some may last even longer, though some may not last that long. The exciting part is that you can try out all the different flavors and all the different designs of disposable hookahs, because you can try a new one out every time. Have your friends each get a different hookah flavor, and then share them with each other. Be sure to test out as many different flavors as you can, and decide which ones are your favorites.

Buy Now The Best E-Hookah Vaporizer For Your Needs!