Cigars are often associated with power and luxury. Smoking them is considered an art form, appreciated by a wide variety of cultural icons, both male and female. They also have a large following around the world, with brands based on where the tobacco was grown and where the cigars were manufactured. Humidors, often found in cigar shops, specialise in storing cigars in a specific environment to keep them fresh for those who wish to enjoy them. As we will see, the experience of cigars has also been translated into the vaping community, providing one more option for those who wish to vape but without the traditional e-cig or box mod. Continue reading

Cigars are defined as a tightly rolled bundle of tobacco leaves that have been dried and fermented. The cigars can be a variety of lengths and widths, depending on the manufacturer and country of origin. During the 19th century, cigarettes were still rare, but cigars were common among those who chose to smoke. The difference between cigars and cigarettes is that the leaves are rolled, whereas cigarettes have the tobacco in a shredded form.
Cuban cigars are a unique brand of cigar. To be a Cuban cigar, then it needs to have been manufactured in Cuba, with all parts of the cigar, including its leaves and wrappings being manufactured within the borders of the island. Cigar production is controlled by the Cuba government. The art of hand rolling cigars is considered one of the most prestigious on the island, although not all original Cuban cigars are hand-rolled. These cigars are the biggest export of Cuba. Because of the status attributed to these specific cigars, they are often counterfeited by others.

What Is an Electronic Cigar?

Electronic cigar combine the shape of a traditional cigar with the technology of e-cigarettes. Thus, vapers have another option to use in their vaping. These devices are tar and tobacco-free. Electronic cigars can be puffed or inhaled. They are made up of a battery, built-in atomiser, microprocessor, heating element, along with the e-liquid mixture, which can include nicotine if requested.

Depending on the manufacturer, the device can have a very realistic appearance, including an LED light at the end of the cigar to mimic the flame that occurs when a traditional cigar is lit. However, not all manufacturers provide such a realistic product in terms of the feel and overall look.

Therefore, the consumer needs to be aware of the warranty and return policies of the vendor where they purchase their product. Some electronic cigars also offer a chewable mouthpiece, which gives them an even more realistic appearance and experience for the user.

The flavours of the cigars depend on the manufacturer. Most of them offer flavours similar to traditional cigars already on the market. There are even those electronic cigars available that mimic the flavour of a Cuban cigar.

E-Cigars: What Are the Benefits?

As with all vaporisers, electronic cigars are a fantastic alternative to their traditional tobacco counterparts. E-cigars produce a large amount of thick, flavoursome vapour, giving you the feeling of a traditional cigar. While establishments such as restaurants or bars may ban the smoking of cigars, many are becoming more open to the use of vaping products indoors and around other members of the public.

Vape cigars have another benefit over another popular vaping option, the e-cigarette. Unlike e-cigarettes, electronic cigars are capable of producing massive clouds of vapour, providing a great depth of flavour, and allowing you to fully experience the taste of your e-cigar. Manufacturers put a lot of care into making sure that electronic cigars mimic all the attractive qualities of a traditional cigar: the taste, the feel, the weight in your hand. E-cigars can even be bought which replicate the flavour of the world famous Cuban cigars. With all these options available, the health benefits over traditional tobacco products, and the great quality of many electronic cigars, there really is no comparison with traditional cigars for the conscientious vaper.

How to Choose the Best Aussie Electronic Cigar

The best way to choose the electronic cigar is based on what your favourite traditional cigar is. Then you can find the electronic cigar that offers a similar flavour and appearance. Another important aspect is how long the battery life is. Vaporising the e-liquid can take plenty of energy, so if the battery does not last through more than one or two uses before needing a recharge, then it might not be the best option for you.

If you are a heavy vaper, then you will also need to look at the size of tank available with the electronic cigar you are contemplating. More frequent vaping can mean that you will need to make sure the tank can hold enough e-liquid for a day’s worth of use.
Check out E-Puffer, the most quality electronic cigars manufacturer we found in the industry.

E-liquids can be made from both U.S. manufacturers and others around the world. Depending on the country, the standards for production can vary widely. Therefore, it is important to make sure that your e-liquid is purchased from a reputable source. Additionally, you will want to decide on the flavouring and the amount of nicotine you would like to have included in your e-liquid. Some manufacturers only offer a set amount of nicotine options. You also want to make sure that the manufacturer uses a child-resistant cap for their e-liquid, particularly if you are adding nicotine.

Some E-cigars are made to be disposable, but they will typically give the vaper the use of the equivalent of 20 to 30 traditional cigars. Since these electronic cigars have a more traditional cigar appearance, since they are not going to be swapping out parts, such as tanks, batteries or tips. Yet, there are also plenty of options in terms of flavours and appearances within the disposable category. One thing to note is that disposable electronic cigars can be purchased in larger quantities at one time.

The Best Electronic Cigars in Australia

Additionally, the e-liquid in your electronic cigars made not be manufactured in Australia, but in another country. Therefore, you will want to review carefully where everything is being made. Shipping will also have additional restrictions and potential costs. So it is important to understand the return policy, as your travel time may eat into that return period. Warranties may also be different based on the country of origin, so you will want to make sure you understand that prior to purchase. Costs may also be slightly higher or lower, depending on how the currency exchanges.

Regulations on Electronic Cigars in Australia

Vaping regulations are subject to change, especially as countries and governments adapt to the growing popularity of using vaping products. You can keep up to date on current laws by checking out the regulations in place in your state or territory online, and by keeping an eye out for any changes. This legislation is really very much still in its growth phase, and can seem a little confusing, so it is worth taking the time to make sure you understand what is permitted. There may be rules in place regarding buying, selling, transporting, importing, or advertising vaping products and accessories.

E-cigars are legal in all Australian states and territories, provided that they do not contain nicotine. E-cigars containing nicotine are legal to use (but not necessarily to buy or sell) in six out of eight states/territories. As mentioned above, they are available both from vaping or cigar shops as well as from online vendors.

As mentioned above, shipping and handling costs to Australia may vary if purchasing electronic cigars online. Make sure to bear these in mind when ordering your electronic cigars, and to allow enough time for your order to be delivered.

Make sure to check out delivery costs, estimated time of arrival, and any bulk buying deals that are available when choosing which manufacturer to buy your electronic cigars from. Don’t be afraid to shop around to find the best deal for you!

Some of the accessories of electronic cigars include disposable tips that allow for a user to chew on the end as they would with a traditional cigar. There are also the traditional elements, such as cartomizers, heating elements and batteries. However, this electronic cigar is not made for customization, so there are limits to changes one can do to create a personalized e-cigar.

Disposable e-cigars will come in various options. One can purchase a pack of 5 or more, thus giving you plenty of vaping capability without having to trade out any particular parts. You can also order additional mouthpieces or chewable tips if you prefer.

When it comes to electronic cigars, they have truly become the way for cigar smokers to transition from the tar and chemicals of traditional cigars.

Additionally, this allows for cigars to again reclaim their space in the culture as a part of celebrations, including graduations, births and weddings. With the e-liquid providing a natural water vapour, there is no need to worry about cigar smoke lingering on your clothes or furniture. No longer does a cigar smoker need to be banished outside of the house. Instead they can enjoy their electronic cigar easily within any crowd or at any event.

This is the larger of ePuffer’s vape cigars, and it’ll last you around 1800 puffs. It is fairly large compared to ePuffer’s other models at 151mm and weighing 35 grams. Like the other electronic cigars available from ePuffer, it comes wrapped in paper with an ash tip LED to simulate a genuine smoking experience.
For the amount of vapor you’re able to get out a single disposable model, the Churchill is unmatched.
Retail Price: $21.95

ePuffer’s beginning electronic cigar comes in two colors: black and traditional brown. This basic model offers a 650 mAh battery, which granted leaves a little to be desired in the wake of more powerful vaporizer batteries already available on ePuffer’s website.
The body of this electronic cigar is made to feel like the real thing, so it is wrapped in ePuffer’s special silk-feel coating and fitted with a comfortable mouthpiece.
Finally, the cartridges that are compatible with the e-650 come equipped with their own atomizers, so you begin with a fresh atomizer each time for the freshest flavor and best vapor.
If you’ve never tried an e-cigar, the e-650 just might be for you. This is the perfect introduction to a niche market.
Retail Price: $59.95 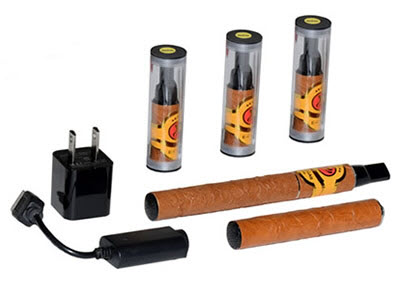 The e-900 is ePuffer’s answer to those who were dissatisfied with the 650 mAh battery in the previous model. With a 900 mAh battery, this electronic cigar can handle up to 900 puffs before needing to recharge.
ePuffer believes that a cigar is an indulgence and they have designed their e-900 to be exactly that. It comes in one design: authentic textured paper for the most authentic smoking experience.
Like the e-600, the e-900 comes with cartridges that are fitted with atomizers for the freshest vapor each time you inhale.
If you’re looking for a quality electronic cigar, either for yourself or a friend, this is the perfect choice because it combines authenticity, flavor, and a great battery.
Retail Price: $69.95