There are plenty of vapers across Canada who enjoy the process of vaping for relaxation or as part of their transition away from more traditional tobacco options. At the same time, there are plenty of vapers who do not want to worry about filling e-liquid tanks or changing out batteries. They do not want the hassle of adjusting voltage or wattage.

As a result, the disposable e-cig market has grown rapidly in Canada since the turn of the century to give these vapers a simple and easy way to enjoy their vaping without all the extra accessories typically associated with box mods and atomizers. Manufacturers have become aware of this market and are providing plenty of options to satisfy them. This includes both disposable e-cigarettes and e-cigars. Thus, you have plenty of options to achieve the look and feel that is most enjoyable to you or that translates best from your previous tobacco habit. Continue reading

Tailoring Your Experience by Manufacturer

Do you prefer cigarettes or the relaxing scent of cigars? When it comes to disposable e-cigarette options, one is not limited to just a few look alike cigarettes. Instead, there are a variety of looks to the disposable trend, as well as e-cigar options that are also disposable. E-cigars also come in a variety of flavours meant to mimic the scents and taste of some of the world’s most popular cigars. This includes, of course, the world famous Cuban cigars that are typically hand-rolled.

For example, Apollo offers disposable e-cigarettes in three different flavours. In addition, they also offer disposable e-cigars throughout Canada. These products provide the user with a vaping experience that is easy to obtain without having to purchase multiple accessories. The con, of course, is that your flavor options are more limited within the disposable spectrum of products.

Disposable e-cigarettes, or even e-cigars, are a great cost-saving option versus traditional tobacco cigarettes. The reason is that even though each disposable e-cigarette might cost equivalently the same as a traditional pack of cigarettes in Canada, one can use a disposable cigarette to achieve the same amount of vaping as would be equivalent to several packs of cigarettes. Of course, this would depend on how heavy a vaper one is, but it is still a cost saving option.

Looking for additional flavour options? E-Puffer offers several disposables with multiple flavours, allowing those vapers who choose this option to enjoy the benefits of a variety of e-liquids. Not only do they offer fruity flavours, they also offer a menthol version as well. In addition, the company offers 12 packs of these disposable cigarettes. One of these e-cigarettes can be used for approximately 500 puffs per device.

With a majority of the manufacturers, one can also find a variety of rewards. For example, some manufacturers will offer you a free disposable for the return of a certain number of used disposables. Others will give you one free with a purchase of a certain number of disposable e-cigs. Additionally, there are also options to purchase disposables in larger packs. Therefore, you can get a discount for a larger purchase, thus adding to your savings. Again, with the amount of puffs through one disposable e-cig, it is easy to see how quickly you can reduce the amount of money spent on tobacco products.

For those who are trying to quit smoking, these disposable e-cigs can give you the feel of more traditional cigarettes without the negative aspects of cigarettes. One can also choose a disposable that gives him or her the level of nicotine necessary to assist in the process of quitting. These devices are also made with food grade ingredients to produce the e-liquids. Other disposables might offer the option of vaping dried tobacco or other herbs as well as essential oils. Thus, you can tailor your experience to match your personal preferences.

However, the cheaper e-cigarettes often look very fake. The LED lights might not give a realistic glow, instead appearing as a simple orange tip. In addition, they might not offer the same amount of vaping time as quality e-cigarette options. Still, there are plenty that offer a more realistic appearance, as well as a longer vaping period and overall there’s a lot of choice across Canada for people to find a vaping experience that fits with their own personal tastes and budgetary requirements in a way that traditional smoking can’t match.

There has of course been much confusion shrouding the legality of vaping across Canada in recent years, something which has clouded the fledgling industry with a negative image.

At the end of November 2016, the Canadian government moved to clarify this issue through further legislation to bill 45 which aligned vaping and vape products closer to the restrictions already in place for conventional nicotine products such as cigarettes and rolling tobacco. The act of 2015 began the government’s implementation of vaping, but the new law now fundamentally turns the governance of vaping products into a federal law rather than the provincial and municipal authorities ruling independently on this issue across the country. However, the law also separates vaping as an independent classification of product to regular smoking which is highlighted by the renaming of the tobacco act, to the tobacco and vaping products act.

With the main focus of this bill being to protect the younger generation, it is now illegal to sell vaping products to anyone under the age of 19, in fact, everyone under the age of 19 are not now permitted to enter a vaping shop without an accompanying adult. Further still, the bill aims to tightly regulate the appeal of vaping to minors through its use of packaging and advertising as well as prohibiting flavours which could be deemed as appealing to a younger audience, such as bubblegum and candy flavours, with menthol flavoured products to also be phased out within the next two years.

As of the beginning of 2017, vaping in public spaces is still controlled under local by-law until an agreed practice is implemented nationwide with regards to the new law. A full list of area restrictions can be found online, however, in areas throughout the country that still freely allow public vaping, it is always advisable to check with the staff of bars and restaurants first to ensure that there are no restrictions in place by the management who can always reserve the right to enforce vaping constraints within their premises.

With many conflicting medical survey results and media reports across the globe arguing as to whether vaping represents a gateway to conventional smoking for teenagers, a growing consensus is now forming to disprove vaping is an introduction into the world of smoking. Indeed, it appears that vapour devices are in fact replacing combustible smoking amongst youths whilst offering an effective method of quitting nicotine altogether for people who already smoke as has long been argued by Randy Hillier, the MPP for the Ontario progressive conservative party.

E-cigarettes are often the first experience many people have both with smoking and with vaping. As users gain experience, they often move to other forms of vaping, including box mods and even their own creations. However, there are also those who prefer to stick with the more traditional looking e-cigarette or electric cigar. Those individuals are often willing to take advantage of the disposable option because it makes their vaping experience easy and fairly uncomplicated.

Imagine that instead of filling an atomizer or changing out e-liquid containers, you can just grab a fresh e-cigarette. These do not require much in the way of charging, and the batteries do not need to be replaced. As discussed, many Canadian outlets also offer rewards for the return of disposables or for larger purchases providing a further incentive for people to favour the disposable over the combustible.

Overall, the disposables which are readily available in Canada are a nice option for those who prefer vaping but are not necessarily interested in all the additional accessories, devices, and e-liquids. At the same time, they still provide a cost saving option, especially for those who are heavy traditional smokers. The cost of a pack of cigarettes is typically higher than one disposable cigarette, which can be the equivalent of several packs.

Many traditional smokers also appreciate that they can choose the amount of nicotine available in each disposable cigarette, so it is consistent from one to another. As they work to reduce the amount of nicotine, they can continue to bring the quantity down. Disposables can be a simple and affordable option for those looking to quit and for those just starting out vaping. These disposables can also be purchased in Canada without any nicotine, so you can enjoy the vaping flavours without the added nicotine.

As new laws catch up to the modern lifestyle trends in Canada, the distinct health benefits provided by vapour devices over traditional nicotine products are slowly being recognised through long-term studies which pave the way for disposable e-cigs to be even more popular in the coming years, but however you chose to vape, disposables are an affordable and flavoured option to vape with minimal fuss and mess. 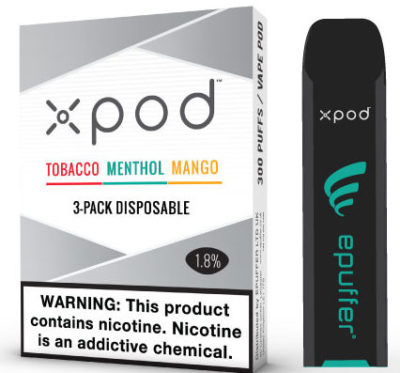 At only 15g, ePuffer’s new XPOD Minis will slip inside your pocket unnoticed. Better yet, when you’re finished with one, you can just throw it away–no hassle whatsoever. Each pod comes with 1.2ml of 50/50 blend vape juice at 18mg/ml of nicotine. You can purchase these pods in either mango, menthol, or tobacco, and because the vape liquid is made with state-of-the-art nicotine salts, you can bet that each puff tastes like the real thing.

Now South Beach Smoke doesn’t have an official line of disposable e-cigs, but their deluxe kits are inexpensive enough for us to lump them under the same category. Their extremely popular deluxe kit comes with a short and long ion battery as well as a wall-adapter, micro USB cable, and 10 cartridges. This kit has the equivalent of about 14-16 packs of cigarettes, and so even though it’s technically not a pack of disposable e-cigarettes, it could function as one nonetheless. They also have their advanced deluxe kits with more cartridges and extra accessories. 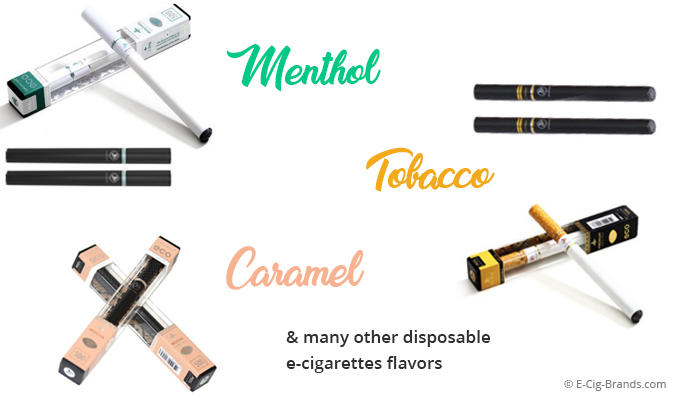 For $9.95, you can get ePuffer’s premium eco disposable e-cigarettes in a wide variety of flavors including tobacco, menthol, and new e-shisha flavors like appletini and watermelon sangria. You can also get the 12-pack for $79.95 if you know you’ll be using them on a regular basis. These e-cigs are powered by a 3.7V cylindrical lithium battery and have an orange glowing LED tip to resemble the burning charcoal butt.

Apollo has a tab for disposable e-cigarettes, but it doesn’t seem like they actually have anything posted there at the moment. They have told us though that they occasionally have disposable e-cigs for sale, so it is worth keeping an eye out for them. Look here for updates.